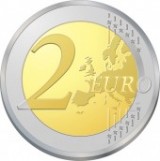 Our series on euro coins here at Exchange Euro Coins is looking at the 2 Euro coin. Like the 1 Euro coin, this coin is bimetallic. The sections are reversed, however. The central section of the 1 Euro coin is made of cupronickel, a copper-nickel alloy. The outer circle consists of nickel brass. On the two Euro coin (€2), the outer section is cupronickel while the inner section is brass. The 2 Euro coin is the largest euro coin at 25.75mm or just over an inch in diameter. Unlike any other euro coin, its edge bears an inscription; the text of the inscription varies depending on the issuing country.

The reverse of the coin is very similar to the one-euro coin; it shows an image of Europe, as well as two rows of six stars each and the legend “2 EURO”. There are two versions of this face; a pre-2007 version which shows a slightly different map of Europe, and an updated version released in 2007 to show new member states. The reverse design is based on an original by Luc Luycx, a Belgian artist.

Uniquely among euro coins, the two-euro coin has an inscribed edge. The inscription varies from issuing country to issuing country. In some cases, the inscription simply reads “2 Euro” or “2″. In others, such as in Slovakia or Slovenia, the inscription gives the name of the country. Germany and the Netherlands both have national mottos: “EINIGKEIT UND RECHT UND FREIHEIT” (“unity and justice and freedom”) for Germany and “GOD ZIJ MET ONS” (“God be with us”) for the Netherlands. You can view two Euro coins (€2) at the European Central Bank website