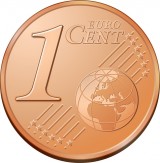 The 1 cent Euro coin is the smallest denomination of Euro coin and the smallest coin exchangeable at Exchange Euro Coins. Each Eurozone state produces its own version of the coin; these differ slightly in their designs. At present, there are 24 different designs of 1 cent Euro coin, representing 20 issuing states, including some designs that have been discontinued but can still be found in circulation.

The one-cent coin is a thin circle of steel with a copper coating. It is 16.25mm (approximately 1/3 inch) across and 1.67 mm thick. The edge of the coin is smooth.

The obverse face of the 1 cent Euro coin is the same for all member states. This side, called the common side, shows the legend “1 EURO CENT” together with a smaller globe and twelve stars connected by a pattern of diagonal lines. The numeral 1 of the legend is prominent, making it easy to identify. The design dates from 1999, although the coin was not introduced until 2002. Designer Luc Luycx created the image for the coin’s obverse; different designers created the unique designs on the reverse.

The reverse of the coin varies depending on the issuing country. Each country of origin has its own design for the reverse, giving the name of the country. In some cases, the coin shows the portrait of a ruler. For instance, the one-cent coins of Vatican City show the face of the current Pope. In other cases, the coin shows a design representing the issuing country. For instance, reverse of Finnish coins show a lion, a symbol of Finland, while the one-cent coin from Monaco shows the coat of arms of Monaco’s ruling family. Each reverse design is surrounded by a ring of twelve stars. Some of the designs have changed over time, representing a change in ruler or an updating of the design. Although they are no longer being produced, some of the older one-cent coins remain in circulation. There is a wealth of info about the 1 cent Euro coin on the ECB website.

If you have any Euro coins to exchange then please click here.