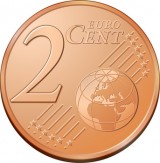 Like other Euro coins, all two-cent coins have the same reverse side, while the obverse varies according to the issuing nation. The reverse bears the legend “2 EURO CENT”, with a prominent numeral 2, as well as the image of a globe and twelve stars to represent the founding nations of the Euro. Luc Luycx designed the reverse of the coin, which first entered circulation in 2002. Apart from the legend, this design is the same as that of the one- and five-cent coins.

Some Eurozone countries have a different design for the obverse of each of their small-denomination coins, while others use the same image for all of them. For instance, all Dutch coins from 1 to 50 cents show the profile of Queen Beatrix of the Netherlands. By contrast, the Slovenian two-cent coin displays an image of the Sovereign Enthronement Stone, a Slovenian national treasure, while the other denominations show other national symbols. Each national side does include certain required elements: these are a ring of twelve stars and the date of issue. The name of the country is usually also included. National designs can change, either because the design is updated or because the country’s sovereign changes. When this happens, the older coins can remain in circulation for some time. More info on the 2 cent coin can be found on the European Central Bank website.

You can read more on our Euro coin exchange service here.