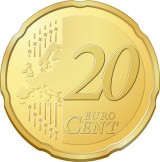 Exchange Euro Coins continues its series on the coins of the Eurozone with the 20-cent Euro coin. The 20 cent Euro coin is the middle of the three gold-coloured Euro coins, both in size and value. Like all Euro coins, it has a standard reverse side, with the design of the obverse varying depending on the country of origin.

Like the 10- and 50-cent coins, the 20 cent Euro coin is made of an alloy called “Nordic gold”, which actually consists of copper, aluminium, zinc and tin. The most distinctive feature of this coin is probably its unusual shape. The edge of the coin is smooth except for seven regular indentations, which extend a short distance into the face of the coin. The resulting shape is called the “Spanish flower”, and is modelled on the pre-Euro Spanish 50-peseta coin.

The reverse of the coin is identical in all issuing countries; the left side of the face shows a map of Europe, while the centre and right bear the legend “20 EURO CENT”. The 20 is prominent. Two versions of this design exist with slightly different maps of Europe; the pre-2007 design shows each member state separately, while the 2007 design shows a map of all of Europe. The design is based on an original by Belgian artist Luc Luycx.

For photos of all the 20 cent Euro coins in circulation you can view information on the ECB website. If you have some Euro coins that you want to exchange then click here.