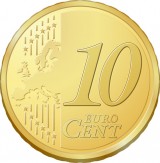 The 10 cent Euro coin is the smallest of the “gold” Euro coins discussed here on Exchange Euro Coins, both in size and in value. Like the 20- and 50-cent coins, it is made of an alloy called “Nordic gold”. Despite the name, this alloy contains no gold; it is a mixture of copper, aluminium, zinc and tin.

The ten-cent coin is 19.75 mm in diameter and 1.93 mm thick. Unlike the lower denomination coins, which have mostly smooth edges, it has a milled edge, with regular depressions giving it a ridged texture. Like all Euro coins, it has a standard design on the reverse, while the obverse design varies according to the country of origin.

The reverse of the coin is based on a 2002 design by Belgian artist Luc Luycx. It was updated in 2007 to reflect the addition of new countries to the European Union and the Eurozone. It shows a map of Europe together with the legend “10 EURO CENT”. The legend takes up most of the reverse, with the map occupying a small area on the left side. The coin also shows 12 stars in two pairs of six, connected by vertical lines.

The obverse side of the coin varies based on the country of origin. Different countries have different policies regarding their obverse designs. For instance, in some countries the obverse is the same on all denominations. In Luxembourg, for instance, all coins show the portrait of the Grand Duke of Luxembourg. In other countries, each coin shows a different image. For instance, the Greek ten-cent coin shows a portrait of revolutionary writer Rigas Feraios, while the lower-denomination coins have images of ships. In some countries, images are repeated within a group of coins. The Portuguese ten-cent coin, for instance, has the same obverse image as the 20- and 50-cent coins, while the one-, two- and five-cent coins all have the same image as one another. All the obverse designs feature a ring of twelve stars, a symbol of the European Union.