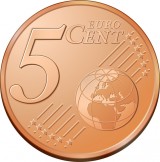 Exchange Euro coins including the 5 cent…

The 5 cent Euro coin is the largest and most valuable of the copper-covered Euro coins issued by the ECB and discussed here at Exchange Euro Coins. Like other Euro coins, these were first issued in 2002. Each Eurozone member state issues its own five-cent coins; although some elements of the design are the same across Europe, there are also differences between the coins issued by the various member states, as well as between coins of different value.

Like the one- and two-cent Euro coins, the five-cent coin is made of copper-coated steel. It has a smooth edge, like the one-cent coin, and is the same thickness at 1.67 mm. It is slightly larger, being 21.25 mm across.

The reverse of the five-cent Euro coin is the same in all Eurozone countries, and resembles the one- and two-cent coins. Designed by Belgian artist Luc Luycx, the design shows a globe with Europe highlighted, 12 stars connected by six diagonal lines, and the legend “5 Euro Cent”. The numeral 5 is large, taking up much of the design.

The obverse of the coins varies depending on the country of issue. For instance, the Belgian five-cent coin shows a profile of the King of Belgium, while the Greek 5 cent Euro coin shows a modern tanker ship. Not only does the design of the obverse vary from country to country, but it varies between denominations in some countries but not others. For instance, the Belgian one-, two- and 5 cent Euro coins all show an image of the King, while the Greek copper coins all show different types of ship from throughout history, emphasising Greece’s maritime heritage.

Although the obverse designs vary from country to country, some elements appear in all designs. All obverse designs include a ring of twelve stars around the edge of the image. Additionally, most designs include the name of the country, although some opt to display a monogram or initials. For instance, the French coins bear the monogram “RF” for “Republique Francaise”. In a few countries, such as Finland and Austria, the name of the country is absent altogether.

Click here for info on our exchange Euro coin service.