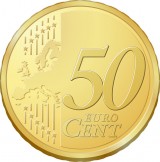 The 50 cent Euro coin is the largest — both in size and in value — of the gold-coloured Euro coins discussed here on Exchange Euro Coins. Like the 10  and 20 cent coins, it is made of “Nordic gold”, which is in fact an alloy consisting of copper, aluminium, zinc and tin. This alloy gives the coin its characteristic rich gold colour.

The 50 cent Euro coin is 24.25 mm in diameter, just under one inch. It is 2.38 mm thick and weighs 7.8 g. Its edge has regular indentations, more frequent but much less pronounced than the indentations on the edge of the 20-cent coin.

The design on the reverse of the coin was created by Belgian artist Luc Luycx and features a map of Europe together with the inscription “50 EURO CENT”. Pre-2007 (or 2008 in some member state) coins show a different map of Europe, with each member state highlighted. The reverse also displays twelve stars connected by six vertical lines.

Like all Euro coins, the 50 cent coin has the same reverse no matter what country issues it. The obverse, however, depends on the country of origin. Each nation has its own design for the obverse of the 50 cent Euro coin. In some cases, the design on the obverse is the same no matter the value of the coin. For instance, Irish Euro coins all show a harp, while Finnish ones show a lion, both traditional symbols of their countries.

In some countries, though, the design on the obverse varies according to the denomination of the coin. This can vary from coin to coin, or by groups — Portugal, for instance, has different obverse designs for the copper and Nordic gold coin groups. In some countries, the situation is even more complicated. In Greece, for example, every coin has a different obverse design, but the designs are thematically grouped so that the copper and gold-coloured groups illustrate two different themes relating to Greek history.

For more info on the fifty cent Euro coin check out the European Central Bank website.